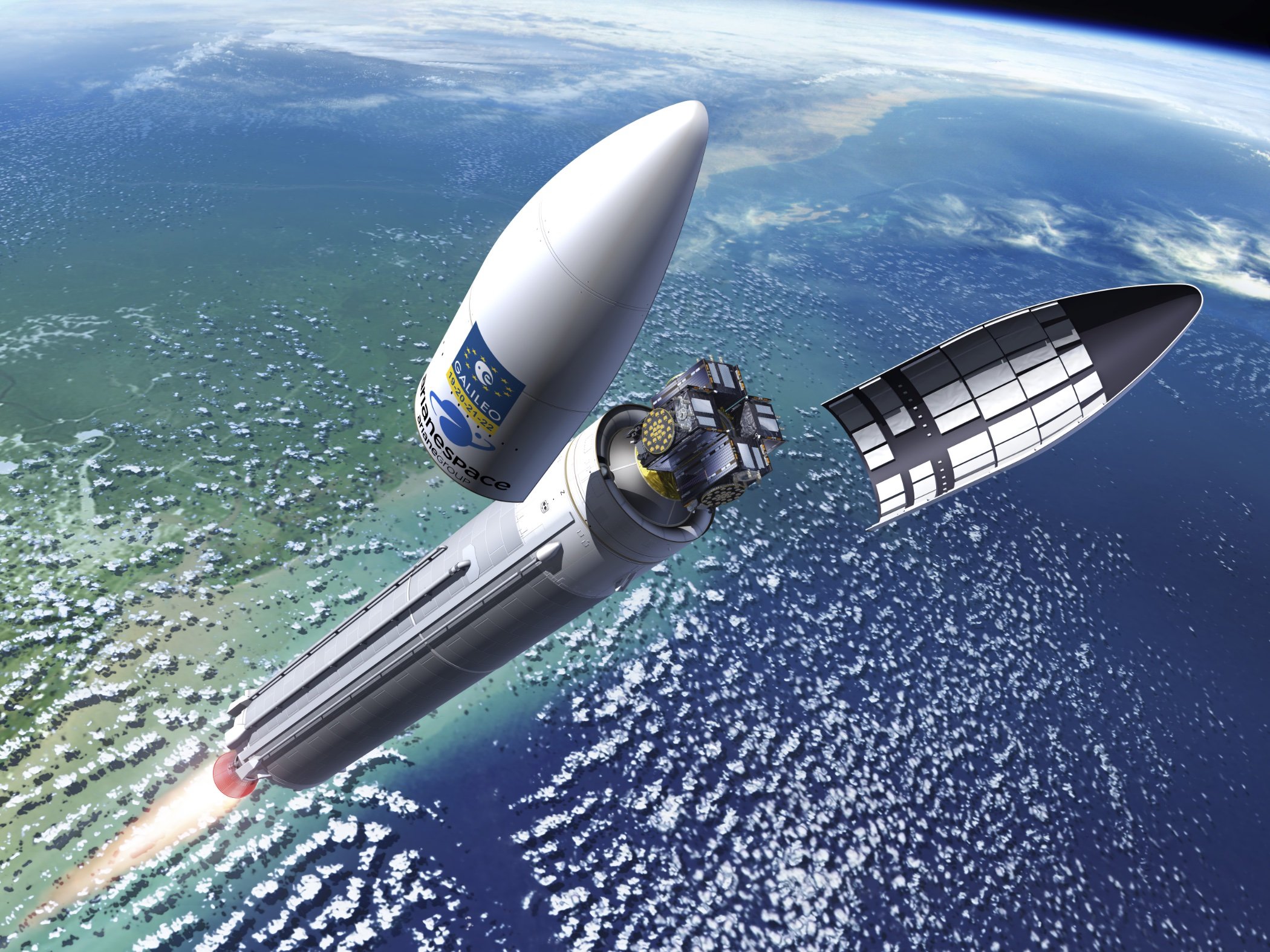 By Ryan Daws | 6th December 2021 | TechForge Media
Categories: Satellites,
Ryan is a senior editor at TechForge Media with over a decade of experience covering the latest technology and interviewing leading industry figures. He can often be sighted at tech conferences with a strong coffee in one hand and a laptop in the other. If it's geeky, he’s probably into it. Find him on Twitter: @Gadget_Ry

While many of us were enjoying a Sunday dinner, the ESA took to the spaceport in French Guiana to launch the 27th and 28th satellites in its sat-nav constellation.

The satellites were launched using the Soyuz four-stage launcher, the longest-operating in the industry. The total payload was approximately 1,645kg.

Paul Verhoef, Director of Navigation at the ESA, comments:

“Today’s liftoff marks the 11th Galileo launch of operational satellites in ten years: a decade of hard work by Europe’s Galileo partners and European industry, over the course of which Galileo was first established as a working system that began initial services in 2016.

With these satellites, we are now increasing the robustness of the constellation so that a higher level of service guarantees can be provided.”

The satellite’s onboard thrusters will put them into orbit 23,222km above Earth.

A contractor, Spaceopal, has been brought in to monitor the satellites during the ‘Launch’ and ‘Early Operations’ phases. Monitoring will take place from the Galileo control centre in Weßling, Germany.

Second-generation satellites are currently in development and are scheduled to launch from 2024. ESA calls the new satellites the “most advanced and powerful, and fully reconfigurable navigation satellites ever built”.

Former EU member Britain played a large role in the development of Galileo, supplying all key parts and investing £1.2 billion in the programme. Back in January, Surrey Satellite Technology Limited shipped the last of the navigation payloads it was assembling.

The UK was exiled from Galileo as it’s regarded by the EU as a security programme and only firms in its 27 member states can take on work for it. However, Britain and the EU have agreed to cooperate on Copernicus—a constellation of satellites to monitor the Earth for everything from mapping the damage wrought by earthquakes to tracing air pollution.

“This is certainly excellent from an ESA perspective because we have a very strong partner in the UK; their expertise is essential,” Josef Aschbacher, Director General of the ESA, told the BBC.

In June last year, the UK and US signed an agreement for American companies to export space launch technology to Britain and operate from the country’s upcoming spaceports.

Karen Pierce, UK Ambassador to the US, said:

“This agreement marks an exciting new area for UK-US space collaboration and represents a significant step towards US companies launching from UK spaceports.

The commercial space sector already represents hundreds of millions of dollars in trade between our two countries each year, as well as thousands of jobs on both sides of the Atlantic.

This new agreement will generate further growth and prosperity for both our countries.”

The UK Government has awarded grants totalling close to £40 million as part of its ‘Spaceflight’ programme to begin commercial vertical and horizontal small satellite launches from British spaceports. The first launches are expected to take place in the early 2020s.

London-based telecoms satellite firm OneWeb will play a large role in the the UK’s space industry.

The UK Government took a majority stake in OneWeb last year alongside Bharti Global. OneWeb continues to go from strength-to-strength and has since attracted significant investment from Softbank, Eutelsat, Hanwha, Hughes Network Group, and more.

In August, OneWeb launched a further 34 of its Low-Earth Orbit (LEO) broadband satellites into orbit. By 2022, OneWeb is set to have over 600 of its satellites in orbit for global connectivity.

Last month, OneWeb signed an agreement with BT to provide LEO connectivity services. The agreement builds upon a Memorandum of Understanding signed in July to explore how connectivity can be improved in rural areas.

Business Secretary Kwasi Kwarteng commented: “I am thrilled to see the UK at the forefront of this emerging technology thanks to the government’s investment in OneWeb – a crucial part of our plans to cement our status as a global science and technology superpower.”

“We expect to have a demo capability available later this year and we’re working with certain bodies in the UK to advance our thinking there and help design that,” said Neil Masterson, chief executive of OneWeb, during a session of the Satellite 2021 LEO Digital Forum on 7 April.

“We think that there’s something that can be done with the existing Gen 1 design. It’s a bit premature to talk about that right now, but we’re quite focused on that.”

Aside from significant investments, another key pillar of the strategy is increasing collaboration with likeminded partners.

The ‘Five Eyes’ partners (UK, US, Australia, Canada, and New Zealand) get a specific mention as natural allies in space ventures. However, the document also notes how the ESA “will remain a close multilateral partnership for the UK for civil science, exploration, climate monitoring, and technical collaboration.”