While 2019 was the year that fifth-generation (5G) wireless services were deployed across the globe, this is just the beginning of the new trend. So far, launches in North America, West Europe and the Middle East created a small base of 5G customers, however, the technology gained significant traction within the Far East and China markets.

As a result of strategic foresight by the government, the early launch and fast customer adoption in South Korea clearly drove their 5G deployment leadership. By the end of the year, there were an estimated 4.5 million 5G users in the Far East market, roughly 80% of the global total, nearly all of them in South Korea.

North America had the second-highest number of connections, reaching an estimated 800,000 users. West Europe is taking a more tentative approach, waiting to see how the technology develops and evolves, while some parts of the world lack the infrastructure to start on 5G for at least two years.

According to the latest market study by Juniper Research, the total number of 5G connections will reach 1.5 billion globally by 2025 -- that's rising from only 5 million connections in 2019. This trend represents an annual average growth rate of 150 percent over the next 6 years.

The research findings uncovered that growth from these 5G connections is a highly sought-after new revenue stream for telecom network operators. Juniper forecasts that 5G Internet of Things (IoT) connections must be considered as new connections that will not cannibalise existing network operator connectivity revenue from current 4G IoT technologies. 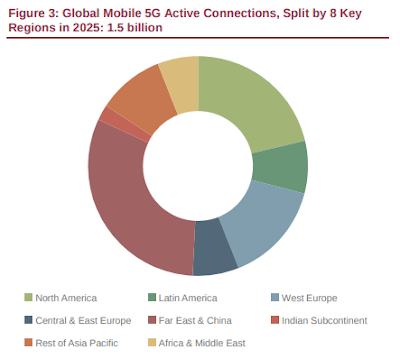 Juniper analysts urge mobile network operators to develop comprehensive value-added services to enable the IoT service users to manage their 5G connections. They now forecast that tools, such as network slicing and multi-access edge computing solutions, will be essential to attract the highest spending commercial IoT service users to use their 5G networks.

Juniper also forecasts that valued-added services will become crucial in the automotive and smart cities sectors. They have forecast that these sectors would account for approximately 70 percent of all 5G IoT connections by 2025, with higher than anticipated levels of device support for 5G radios accelerating the uptake of 5G connectivity.

The analyst research findings claimed that the initial high pricing of 5G connectivity in the IoT sector would likely dissuade all but the high-value IoT users. They have urged network operators to roll out holistic network management tools that complement the enhanced capabilities of 5G networks for IoT capabilities.

"Management tools for the newly-enabled services are key for users managing large scale deployments. We believe that only 5 percent of 5G connections will be attributable to the IoT, but as these are newly enabled connections, operators must view them as essential to securing a return on their 5G investment," said Andrew Knighton, associate analyst at Juniper Research.

When deployed, 5G networks will need to be scalable and intelligently efficient to support billions of IoT devices. A sizeable number of sensing devices are already in place and several uses for the IoT have emerged from these.

That said, due to the significant cost associated with providing adequate coverage for 5G network applications, telecom service providers must fully explore all viable sources of high-margin service revenue.