Following an internet shutdown, the Iranian government has sent a letter to state-run companies asking them what foreign websites they rely on.

The Iranian government cut off internet access for a week earlier this month amid protests against increasing fuel prices.

Experts believe the letter to state-run organisations suggests Tehran is planning to implement a whitelist of sites that citizens can access as part of a wider internet clampdown.

Amir Nazemi, head of Iran’s Information Technology Organisation, sent the letter and said to the BBC that he was "obliged to make sure vital services were available" and wants other government officials to be aware of how the decision affected the economy.

Iran, which has become increasingly isolated amid several international sanctions, has expressed a desire to create a “national internet” since 2005. The idea is to reduce outside influence and information by building copycats of popular foreign services.

On Monday, US Senator Ted Cruz wrote to President Trump calling for sanctions to be imposed on Iranian officials responsible for the internet shutdown: 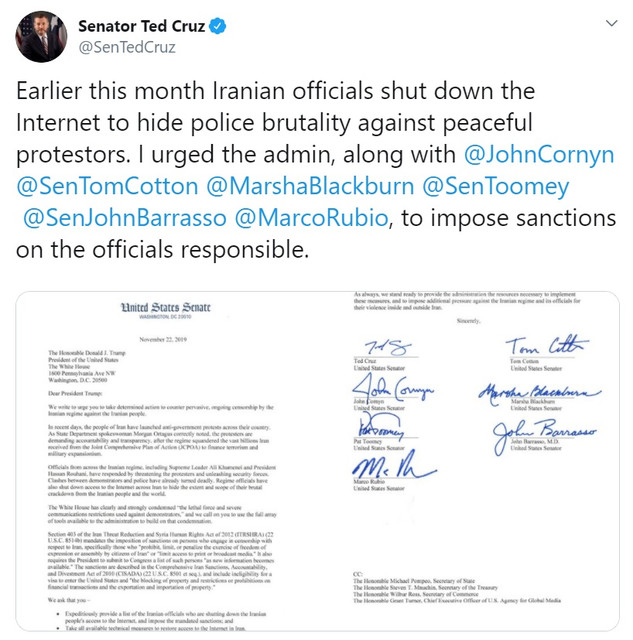 Iran’s letter to state-run organisations has come to light mere days after web creator Sir Tim Berners-Lee launched a “Contract for the Web” to help protect its core values. Among the key principles is preventing governments from cutting off internet access.

When asked why the Wikimedia Foundation decided against signing the contract, they provided the following statement:

"The Foundation was part of the working group that helped to develop the contract, and we very much support the principles that it builds on and the clauses that it lays out. We have not signed as of yet because we still have some open questions around how the contract will be enforced to ensure accountability.

"However, we're still in discussions with the working group and the Web Foundation and look forward to following the progress of the Contract for the Web. We hope that the contract will drive positive change towards a web that empowers everyone to freely participate in knowledge."