Telefónica-owned carrier O2 will seek damages from Ericsson over a software problem which caused telecoms outages in 11 countries.

Affected operators have taken on the complaints and reputation damage from customers. O2 is reportedly seeking ‘millions’ in compensation from Ericsson.

SoftBank, a Japanese telco, was also impacted by the glitch. In a press release, the operator explained the problem:

“The SoftBank Network Center detected software malfunction in all of the packet switching machines manufactured by Ericsson, which are installed at the Tokyo Center and the Osaka Center, covering our mobile customers nationwide.

After the incident, SoftBank received a report from Ericsson that the software has been in operation since nine months ago and the failure caused by the same software also occurred simultaneously in other telecom carriers across 11 countries, which installed the same Ericsson-made devices.”

The result was that O2’s customers were unable to access mobile data last Thursday.

O2 has announced it will be refunding customers with a monthly subscription the cost of two days’ service by the end of January.

A post being spread around Facebook calculates the refund at around 82p each. The post calls for the relatively small amount each to be donated to the homeless instead, which it calculates as being around £28 million. 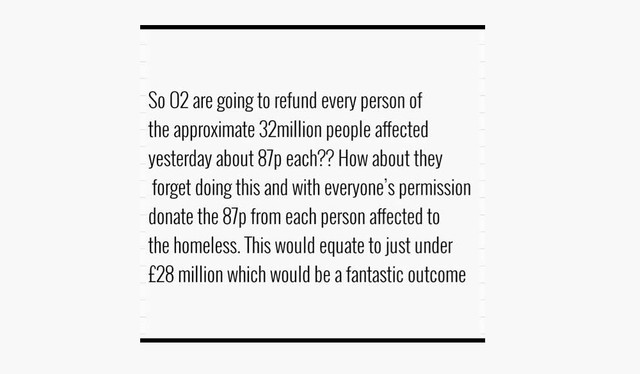 UK telecoms regulator Ofcom often rules that refunds which cannot be processed, typically due to lost or incorrect customer details, must be donated to charity. This was the case last month when Virgin Media was fined £7 million for overcharging customers.

“Virgin Media has reimbursed or made donations to charity in respect of 99.8% of affected customers and the company is continuing its efforts to trace remaining customers in order to refund them,” wrote Ofcom in a release.

“In the event it is unable to trace these customers, it will donate the remaining refunds to charity.”

O2’s pay-as-you-go customers will receive an extra 10 percent when topping up their credit in the new year, or a 10 percent discount when buying mobile broadband data.