The technology, media and telecommunications (TMT) sector has experienced numerous mergers and acquisitions (M&A) within 2018 thus far. All sub-sectors are already showing signs of upside potential as new pockets of growth fuel the Global Networked Economy.

By the end of the first half (H1) of 2018, global TMT values had reached $371.1 billion and 1,693 deals, representing a 19 percent share of global M&A. The strong results nearly surpassed H1 2015 record high of $383 billion, which represented a market share of 21 percent, according to the latest worldwide market study by Mergermarket. 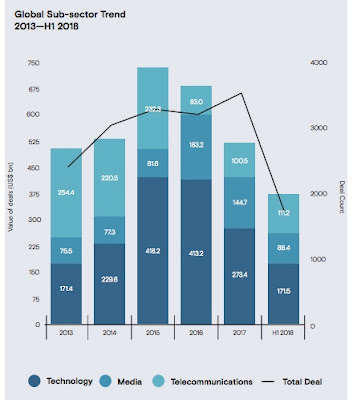 Technology sub-sector accounted for the largest share of TMT’s total deal value -- 46.2 percent with $171.5 billion, while the Technology deal count of 1,329 transactions was responsible for 78.5 percent of TMT’s total volume for the period.

Telecommunications accounted for the second-largest share of deal value with $111.2 billion, or 35.1 percent of the TMT total, and 59 transactions, or 3.5 percent of volume.

The sub-sector was boosted by the largest deal of the period, Sprint’s $58.9 billion bid for T-Mobile, which accounted for 53 percent of the total value.

Media, the sub-sector that was under the spotlight the most in H1 2018, registered $88.4 billion in total deal value and 305 transactions, or 27.9 percent of TMT’s total value and 18 percent of total volume.

Asia-Pacific, though behind both the U.S. and Europe regions in terms of market share, recorded $86.3 billion and 376 deals, representing a 23.3 percent share of total value, boosted by two mega-deals that took place in India.

Note, all data is based on transactions valued at over $5 million and is sourced from the Mergermarket M&A deals database. Deals with undisclosed deal values are included where the target’s revenue exceeds $10 million. Deals where the stake acquired is less than 30 percent will only be included if the overall value is greater than $100 million.