The VoLTE journey: From 488 million to 3 billion subscribers by 2021

Typically, VoIP is voice traffic that's carried over the public Internet. The launch of 4G LTE, and wireless hotspots in major cities around the globe, has brought about a downward trend in traditional switched telecom network activity.

VoIP is more efficient than PSTN, and technology improvements in these areas have been instrumental in allowing VoIP to spread to the mobile environment.

Juniper Research has revealed that the number of Voice over LTE (VoLTE) subscribers will rise from 488 million in 2016 to 3 billion in 2021, as network operators reap the benefits from widespread 4G infrastructure rollouts.

According to the Juniper assessment, there are now 165 operators in 73 countries investing in VoLTE, including 102 operators that have commercially launched an HD voice service using VoLTE in 54 countries.

The market study found that the number of users adopting VoLTE services will likely overtake subscribers of over the top voice app services, popularized by applications such as Messenger, WhatsApp and WeChat, for the first time by 2021. 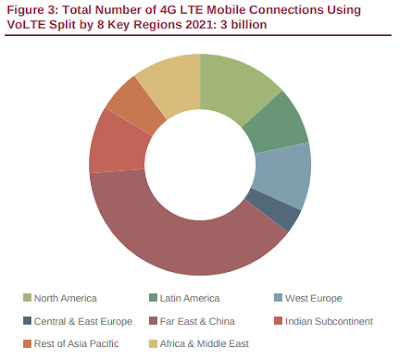 Consequently, the mobile data traffic attributable to VoLTE will rise significantly over the next 4 years, representing a seven-fold rise from 2,000 petabytes in 2016.

The research found that operators will introduce widespread national and international VoLTE roaming, as VoLTE usage rises to over 10 trillion minutes by 2021, equivalent to around 3.3 trillion music tracks.

It argued that it is imperative that traditionally slow-moving operators enter partnerships with platform vendors in order to accelerate service launches.

Juniper predicted that operators will be eager to enter partnerships to maintain their quality of service, rather than downgrade calls to circuit-switched telephony, while roaming.

As such, operators who fail to undergo a shift in attitudes to VoLTE risk losing ground to competitors, and increasing user churn.