Since the rise of the smartphone, the term 'smart' may simply mean that a device has on-board wireless internet connectivity. Therefore, a smart home is one that is designed to deliver or distribute digital services, through a range of networked devices.

Smart home automation and monitoring devices will grow to over 770 million globally by 2021, representing an eleven-fold rise from just 68 million estimated in 2016, according to the latest market study by Juniper Research.

The new study found that increasing adoption of platform evangelism and openness to partnerships is boosting third party application development of devices, especially within developed markets.

Indeed, the study findings uncovered that North America, Far East & China and Western Europe will account for almost 75 percent of all households adopting the technology in 2021.

Moreover, home automation hardware sales are rapidly exceeding subscription services, such as AT&T's Digital Life offering. Juniper forecasts that while homes adopting this payment model will increase, a one-off purchase model will see faster growth over the next 5 years.

The analyst found that revenues from smart home hardware sales will most likely exceed subscription revenues for the first time in 2018, reaching $6.2 billion. But there are many challenges that are ahead for vendors and service providers. 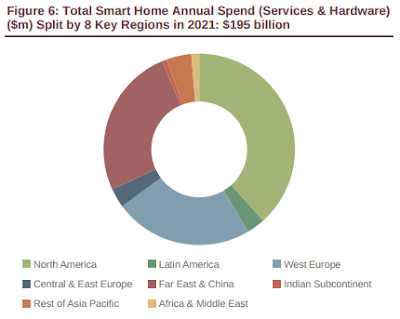 With the launch of O2 Home in the UK, according to the Juniper assessment, they claim that this will remain a niche offering, due to the inability to on-board other devices.

They also believe that the subscription business model was not fit for such an immature market.

New entrants and disruptors will intensify input from the software developer community, while utilizing technologies such as machine learning to improve automation platform intelligence, will successfully enter the market in 2017.

Juniper predicts that this will not only drive increased ‘smart’ device integration, but also generate case-specific applications, which until now have been lacking.

"Successful players will be able to identify critical issues which can be alleviated through the introduction of smart home technology. For example, countries that are faced with ageing populations, such as Japan, will benefit from increasing interplay between automation and digital health services," said Sam Barker, analyst at Juniper Research.

Due to the fragmented market, innovation will play a key role in the success of start-up companies, rather than their agility. The major platform vendors -- Apple, Amazon, Google and Samsung -- will continue to drive the market, and so new entrants should make their device part of a compelling service offering.