During the last couple of years, machine-to-machine (M2M) technology has become an integral part of the services offered by global telecom providers and a significant revenue stream for M2M app specialists. They've developed comprehensive offerings, designed to reduce costs and increase efficiency.

Meanwhile, the associated business models are beginning to account for new use case concepts and application developments; one of the latest to gain significant traction being the Internet of Things (IoT).

M2M refers to the wireless communications fabric between multiple devices. M2M is a supporting infrastructure for the IoT. M2M performs the connections, and provides the device interfaces, allowing data to be transferred between machines over wireless networks.

According to the latest worldwide market study by Juniper Research, new in-vehicle infotainment services such as Apple CarPlay and Android Auto will generate large amounts of new cellular M2M data traffic. Over the next five years, these apps will account for up to 98 percent of all M2M data traffic. 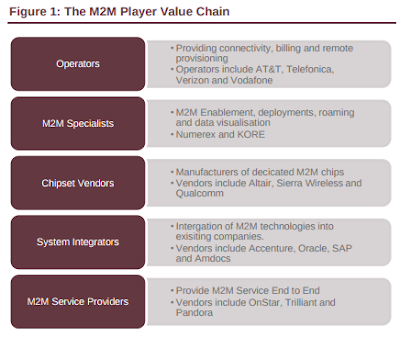 Data intensive applications, such as Internet radio, music streaming and information services, will generate approximately 6,000 PB per year by 2021 - that's the equivalent to over 300 billion hours of music streaming. Moreover, in-vehicle 4G SIMs will provide over-the-air service and subscription updates for drivers and passengers.

The market research found that M2M technology will further the development of autonomous driving systems. Cellular vehicle-to-vehicle (V2V) technology, enabled through M2M, is expected to be the cornerstone of the new system over the coming years.

Consequently, operators will need to ensure that their networks remain able to cope with the projected increases in data traffic, especially in urban areas.

Future smart city systems - such as smart parking and smart intersections - will further drive data usage and the potential strain on mobile networks.

Meanwhile, the research found that other, less data-hungry M2M modules, would see significant increases in adoption across an array of key verticals, including healthcare, agriculture, smart metering and smart home automation.

"The wider M2M market offers a reprieve from declining traditional voice and messaging revenues. Mobile network operators are now champing at the bit to capitalize on the growth of M2M," said Sam Barker, senior analyst at Juniper Research.

However, for network operators to maximize their opportunity in this emerging market, they'll need to evolve beyond merely providing device connectivity, and additionally offer value-added services to their M2M and IoT service customers.