Across the globe, mobile data traffic continues to grow at an unprecedented pace, driven primarily by online video usage. The increased number of mobile subscriptions, new smartphone users and the multitude of available software apps have resulted in an explosion in data usage.

Worldwide mobile data traffic, generated by all smartphones, feature phones and media tablets, will approach almost 197,000 PB (Petabytes) by 2019 -- that's the equivalent to over 10 billion Blu-ray movies, according to the latest market study by Juniper Research.

However, their research found that only 41 percent of the data generated by these devices will be carried over conventional cellular wireless networks by 2019, with the majority of mobile data traffic offloaded to Wi-Fi networks.

The latest Juniper market analyst estimates that the average monthly data usage by smartphone and tablet users will double over the next four years.

The daily digital media consumption by mobile users will continue to rise, driven primarily by the rise in 4G LTE adoption and factors such as high-definition video usage. 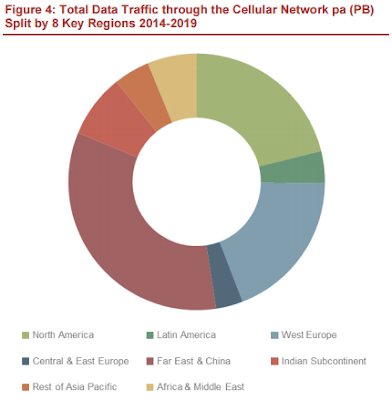 "Certainly, video is forming an ever-greater proportion of network traffic. For example, we anticipate that video traffic over smartphones will increase by nearly 8 times between 2014 and 2019," said Nitin Bhas, head of research at Juniper Research.

Video currently accounts for around 60 percent of global IP traffic and, in some developed markets, this proportion is likely to exceed 70 percent in 2-3 years.

In 2014, data traffic generated by smartphones, feature phones and tablets in the Far East & China exceeded that of North America for the first time.

Wi-Fi is being used for data offload and also to maintain call connection quality in challenging network topologies. For example, EE UK launched its Wi-Fi calling feature on a selected number of handsets in April 2015.

Other key findings from the study include:

According to research bij Mobidia last year, handsets do around 5 times more traffic on WiFi than on 3G/4G. This is logical, since at home and at the office most users connect to WiFi. If according to this research Cellular data will only be 41% of all traffic, there certainly is no relative growth of WiFi! Due to 4G it is now possible and affordable to watch video on the move, so 4G traffic is growing much more. On WiFi my handset has always done more data due to automatic daily backups and more time on WiFi indoors than on the go. I do not see how the title of this article is related to the facts of the research!

Mobile traffic will continue to grow for many many years to come.