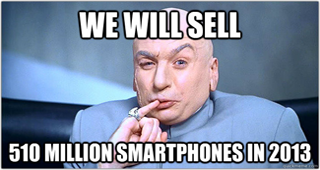 It’s common knowledge Samsung is Android’s biggest player – just this month shipping 10 million of the South Korean giant’s latest ‘S4’ flagship – but just how much does the hardware manufacturer take away from Android?

How much does this equate to? Well, how about a cool $5.1 billion. This leaves LG trailing with $100 million and other manufacturers such as HTC, Sony, and Huawei to fight over a further $100 million.

This is extremely worrying for Google, who although providing the Android software to OEMs, wished to share the profits across manufacturers, not have one with all the control.

Analyst Horace Dediu sums it up best: “Samsung is the tail wagging the dog.”

In fact he believes Samsung is even the one taking Google for a walk; pulling in more revenue from Android than Google does itself. Ouch.

The power and position Samsung now has means the company can have huge influence on the ecosystem as a whole, perhaps as far as requesting exclusives and first access to new software before competitors.

Perhaps this is why Google chose to cosy up with Samsung at I/O, now offering a stock version of Android on the Galaxy S4. You have to wonder if it’ll be Samsung carrying the ‘Nexus’ badge in the next couple of years, and if many other manufacturers will even still be in the game?

But the real elephant in the room here is: what’s happening with Google’s acquisition of Motorola?

Do you think Samsung holding the Android power is worrying? Will other manufacturers ever have a chance to gain significant foothold in market share?