136.7 million Americans now own a Smartphone

The growth of smartphone adoption in the U.S. marketplace has me wondering, how much more upside is available and when will we likely see full market saturation?

136.7 million people in the U.S. owned smartphones -- that's 58 percent mobile market penetration -- during the three months ending in March, up 9 percent since December.

Apple ranked as the top OEM with 39 percent of U.S. smartphone subscribers (up 2.7 percentage points from December).

Samsung ranked second with 21.7 percent market share (up 0.7 percentage points), followed by HTC with 9 percent, Motorola with 8.5 percent and LG with 6.8 percent. 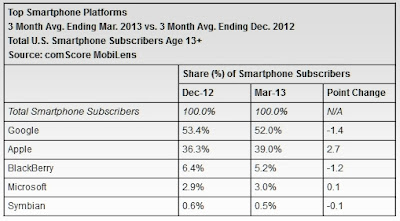 More recent reports from other market researchers say that Microsoft may be gaining market share globally, we'll have to wait and see if that's reflected in the U.S. marketplace.