Why marketing is still problematic for 4G operators

The development of personal broadband and mobile broadband applications are being enabled by the next generation wireless broadband technologies -- such as WiFi (802.11ac - 802.11ad), LTE and LTE-A (LTE Advanced).

According to the latest market study by Juniper Research, 4G LTE revenues are set to grow rapidly, reaching more than $340 billion by 2017 globally, that's compared to just over $75 billion in 2013.

This latest growth will represent approximately 31 percent of total service revenues from all mobile network services of all generations (2G/3G/4G) at that time, and reflects the continued success of LTE in serving higher value subscribers.

The new market study finds that with LTE gaining momentum over the past 12 months, initially dominated by the enterprise segment, consumer subscribers will begin to adopt services in volume in 2013 and will overtake the enterprise subscriber base in 2015.

Juniper found that with the increased penetration of LTE capable smartphones and other connected devices, Mobile Network Operators (MNOs) will need to develop clear pricing strategies to transition customers to their 4G networks. 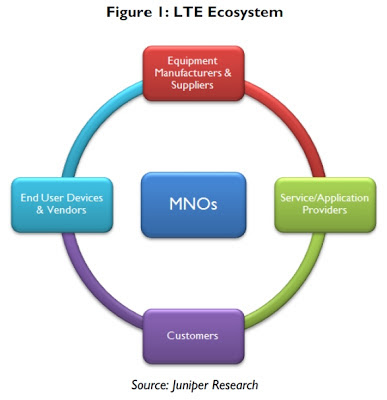 "Overall they will have to present customers with innovative services that will meet users’ requirements and, crucially, that users will attach value to. Operators will have to review their tariff structures to balance the need to monetize the greatly increased data throughput, yet still offer attractive packages," said Nitin Bhas, senior analyst at Juniper Research.

Meaning, from this point forward the success or failure of LTE network deployments will be determined by savvy marketing -- or the apparent lack thereof.

For example, in the UK market, EE felt obliged to reduce its initial LTE pricing by approximately 14 percent -- just within weeks of their network launch -- while Three UK has already announced 4G access at no extra cost.

With the twin spectrum issues -- timing of availability and the MNO cost for wireless spectrum -- playing pivotal roles in deciding the speed of network roll-outs, 4G LTE can represent a substantial financial investment that will take several years to recoup.

This capital outlay is viewed by some as a gamble, bearing in mind that at the outset only a comparatively small number of a mobile network service provider subscribers will be LTE-capable.

Furthermore, the vast majority of LTE revenues (almost 70 percent) are forecast to be generated by the North American and Asian markets.