How the big mobile broadband crisis was avoided

Infonetics Research released excerpts of the findings that resulted from its latest global market study, which analyzed wireless communications radio frequency spectrum allocation and needs in the world’s top economies.

“Seven years ago the International Telecommunication Union predicted the world would need twice as much radio frequency spectrum as is allocated now, and that was even before the advent of the data-hungry Apple iPhone," said Stéphane Téral, principal analyst at Infonetics Research.

But if the ITU forecast had held true, all mobile communications networks with significant broadband usage would have crashed by now.Clearly, that prediction never came to pass.

So, what happened? HSPA+ and LTE are two of the primary reasons why mobile network operators have been able to squeeze more and more capacity out of their limited spectrum allocation.

HSPA/HSPA+ and LTE improve spectral efficiency so significantly that the need for spectrum has been greatly reduced -- often by at least half, when compared with prior technologies.

LTE technology is not only resistant to interference between cells but also spreads transmission efficiently over the available spectrum.

The Infonetics mobile spectrum report explores additional techniques operators are using to optimize their cellular resources -- without adding more spectrum -- and provides an alternative view to the mainstream belief that there is not enough spectrum. 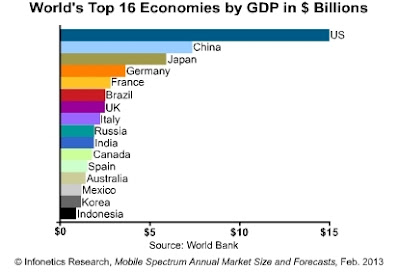