"The mobile world is undeniably shifting from voice to data, as mobile operators migrate as many subscribers as they can to data service plans and smartphones," says Stephane Teral, principal analyst for mobile infrastructure and carrier economics at Infonetics Research.

Already in North America and Asia Pacific, mobile operators derive over 40% of their mobile revenue from mobile broadband and messaging. But while mobile broadband is no doubt the fastest growing revenue stream for network operators, mobile messaging and voice aren't dead just yet.

According to Teral's assessment, the prophecies of doom for mobile operators' SMS/MMS cash cow are being overplayed. Despite the popularity of over-the-top (OTT) messaging applications like Apple's iMessage and WhatsApp, his data shows SMS growing every year from 2012 to 2016, delivering a cumulative $1 trillion in operator revenue during those 5 years.

And, over that same period, voice revenue will decline only slightly, still making up a sizeable chunk of mobile network operator revenues. 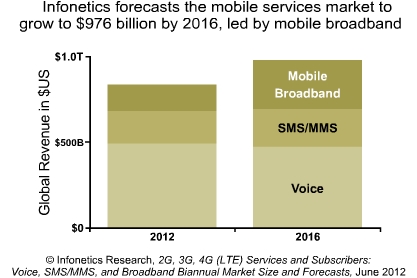 Highlights from the latest market study include: