Expect to see more stories about the apparent winners and losers within the consumer electronics (CE) marketplace in 2013. Announcements at the upcoming 2013 CES in Las Vegas will perpetuate the advance of a few market leaders, while also highlighting the ongoing decline of numerous companies that missed the market transition to a new era.

According to the latest market study by International Data Corporation (IDC), the worldwide smart connected device market -- a collective view of PCs, media tablets, and smartphones -- grew 27.1 percent year-over-year in the third quarter of 2012 (3Q12) reaching a record 303.6 million shipments valued at $140.4 billion.

Current forecasts for the holiday season quarter predict that shipments will continue to reach record levels -- rising 19.2 percent over 3Q12 and 26.5 percent over the same quarter a year ago.

IDC says that 4Q12 shipments are expected to reach 362.0 million units with a market value of $169.2 billion. Holiday season growth will be driven by media tablets and smartphones, which are expected to grow 55.8 percent and 39.5 percent year-over-year respectfully.

Meanwhile, PCs are expected to decline slightly from this quarter a year ago. 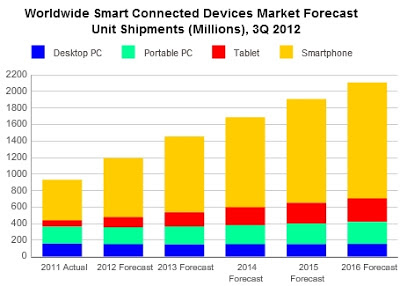 From a vendor perspective, Samsung maintained the top position in 3Q12 with 21.8 percent market share based on shipments. Apple, which ranked second overall in shipments, led all vendors in value with a total of $34.1 billion in 3Q12 and an average selling price (ASP) of $744 across all device categories.

"The battle between Samsung and Apple at the top of the smart connected device space is stronger than ever," said Ryan Reith, program manager at IDC. "Both vendors compete at the top of the tablet and smartphone markets. However, the difference in their collective average selling price (ASP) is a telling sign of different market approaches."

Looking forward, IDC expects the worldwide smart connected device space will continue to surge well past the strong holiday quarter and predicts shipments to surpass 2.1 billion units in 2016 -- with a market value of $796.7 billion worldwide.

IDC's research clearly shows this to be a multi-device era, although market dynamics are shifting in terms of product category. In 2011, PC's -- a combination of desktop and portable PCs -- accounted for 39.1 percent of the smart connected device market. By 2016 it is expected to drop to 19.9 percent.

The shift in demand from the more expensive PC category to low-priced smartphones and tablets will drive the collective market ASP from $534 in 2011 to $378 in 2016. Ironically, the untimely introduction and promotion of high-priced Ultrabook PCs has actually helped to further accentuate the value proposition of the lower-priced devices.

"Both consumers and business workers are finding the need for multiple smart devices and we expect that trend to grow for several years, especially in more developed regions," said Bob O'Donnell, program vice president at IDC.

O'Donnell believes that the advent of cloud-based services is enabling people to seamlessly move across these product categories, which encourages the adoption and usage of more purpose-built devices for the differing online application scenarios.